A Tale of the Tape

There are numerous ways to judge the degree of my running obsession. One of those is the fact that I have now recorded the entire local coverage of the Boston Marathon for two years in a row. While I did not sit down to watch all 5 1/2 hours of it (how could I watch for longer than it'd take me to run the course), I did watch a fair amount.

In 2007, the story was the weather, with a terrible nor'easter putting the race on the brink of its first-ever cancellation. In 2008, the weather was nearly-perfect, so the stories became about whether Robert Cheruiyot (below left) could repeat as champion and notch his fourth overall Boston victory (he did, despite recent political instability and violence in his native Kenya).

The women's race saw the closest Boston finish ever, with Dire Tune of Ethiopia (below) winning by 2 seconds over Russian Alevtina Biktimirova, with the two women trading the lead down the final stretch, until Tune found the extra gear and sprinted away from a valiantly pursuing Biktimirova.

One element of Boston 2008 which received a lot of coverage was the participation of a former cycling star by the name of Lance Armstrong. Having shaved nearly 14 minutes from his first marathon effort (NYC in 2006), Lance clocked 2:46 at New York in 2007 to rightfully earn a spot in Boston. It may be worth noting that a review of online chatter about Lance - at least within the running community - reveals that he seems to in 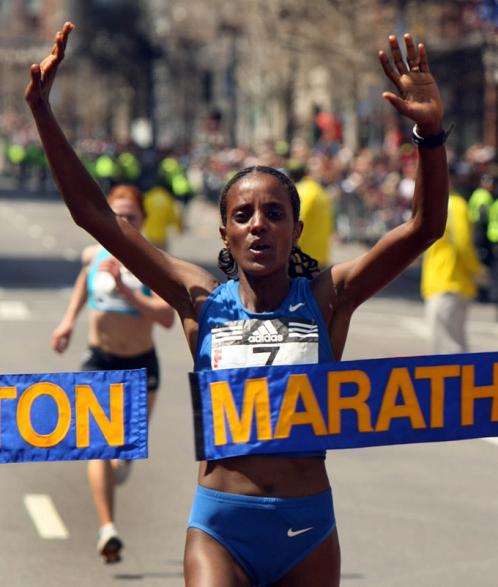 spire strong feelings of admiration or resentment in many people. Personally, I respect his accomplishments (especially having dated Sheryl Crow!) and appreciate his participation in our sport and his apparently healthy respect for the marathon as an event on par with road cycling in terms of the physical and mental challenges involved. I don't fawn over the guy, knowing that he puts on his knee-length Nike running shorts (for which he's paid millions to wear) one leg at a time. Nor do I knock him for his celebrity, his myriad public appearances or the "special treatment" he gets wherever he goes.
Against that backdrop, I'd like to share my befuddlement at the fact that as I watched Lance finish the Boston Marathon on Monday - in an excellent time of 2:50 - the BAA put out a special finish-line tape just for him (see below).

Breaking the tape is an honor reserved for the winners of a sporting event. It's that black-and-white. And while a marathon with nearly 22,000 finishers is likely to have nearly 22,000 compelling stories, none of those stories justifies special treatment during the event, including at the finish line. Imagine Robert Cheruiyot finishing the Tour de France well behind Lance in Paris, only to have a special finish-line ceremony to recognize his "accomplishment". It'd be ridiculous and would deservedly result in the public criticizing the orchestrators of such a scene.
To his credit, Lance appeared a bit confused and even embarrassed when he was steered towards the right of the finish area to break his own tape. I have not found any primary authority (e.g., Lance himself or BAA officials) to explain the BAA's rationale for this obvious photo op/publicity stunt. I would like to know what was going through the officials' minds, and why - if this fabricated image was so important - they didn't just stage the photo op a little bit later outside the main finishing area.
While Lance deserved a finisher's medal, a hearty pat on the back and praise for running a very respectable time on the tough Hopkinton to Boston course, he simply did not deserve his own tape. Perhaps the 4 winners of Men's & Women's Open & Wheelchair divisions are too gracious and secure in their own accomplishments to have felt slighted, but that's exactly what the BAA did by making this special arrangement for the 496th-place finisher, whatever his non-running accomplishments.
-ESG
Posted by Ron Abramson at 9:17 AM

That is puzzling but I am guessing that it is photo op that both Nike and the BAA wanted, not to mention the Livestrong Foundation. I also think it was in poor taste and the person who thought this marketing stunt up will probably suffer backlash as I am sure that this picture will do nothing more than insprire ridicule and won't be useful as an ad. I mean seriously, only the winner gets to feel that tape across their chest not 112th place (or whatever place Lance was). That just makes no sense.