Seemed Like Good Idea at the Time: A Big Sur Race "Review"

As I begin my second race recap of the week (but posted quite belatedly, as you can see), I was thinking that since the second leg of the Boston 2 Big Sur Challenge was not really a “race” for me, it did not warrant a traditional “race report”. Instead, befitting the higher brow nature of Monterey and its surroundings, this write-up will be a “Race Review”. For those who must know the numbers, I finished the 2010 Big Sur International Marathon in 3:51:xx. So far, I’ve raised a little over $3,000 for the Christopher & Dana Reeve Foundation.
Big Sur was the culmination of a long period of anticipation, planning and – of course – training, dating back to last September when the BSIM organizers promoted the idea. I’m not sure how or why I thought it would be advisable to do two marathons a mere six days apart, but I jumped on the B2BS Bandwagon before you could say “inadequate recovery time”.
What follows are some areas of “review” of the BSIM experience.
PRE-RACE EXPO
It’s almost unfair to judge any pre-race expo right after Boston, which may be the king of such events. Big Sur had the basic race-related fare, plus some bonuses such as Vibram Five Fingers. Also, I actually met the owners of RaceReady, makers of my favorite marathon shorts (with highly functional/versatile mesh pockets). Steve got stuck in traffic, so I was able to play a voice mail he’d left me for one of the volunteers in order to be allowed to pick up his race packet and Bib #.
Overall, a decent little Expo, with a fair number of tasty samples, including Clif's new "Shot Rox", delicious protein-packed malted milk ball-style spheres. All the race-related volunteers were very kind and helpful.


RACE WEEKEND DINING
Regardless of what any distance runner says, a HUGE part of becoming a passionate devotee of the sport is the fact that we can eat and drink with relative impunity (well, at least in terms of weight gain).  So, it was a pleasure to be in an area with excellent restaurants, and to be there with fellow running friends who like to eat.

I basically ate my way from my arrival to the race (and afterwords, as you'll see below).  I met online running pal RunningRadi at Steelhead Brewing Company near SFO airport right after touching down on Friday.  On Saturday night, I met my friends/budding business associates Amy and Bryan at Fishwife, where I indulged in Mojitos and the delicious Caribbean bowl pictured below: 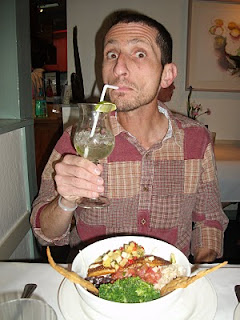 On Saturday, the Reeve Foundation treated us to a thank-you brunch at First Awakenings, where I had what may have been the best pancakes ever, a couple of huge raspberry/coconut/granola beauties accompanied by turkey sausage. 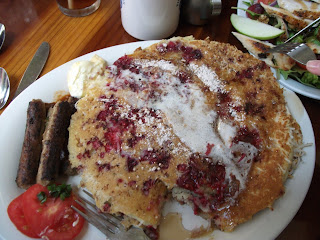 Saturday night's dinner involved meeting up with a whole crew of Boston 2 Big Sur kooks at English Ales, a brew pub in neighboring Marina, a bit removed from the Monterey marathon crowds.  The bitter ales were delicious; the food, not so much.


PRE-RACE LOGISTICS
A point-to-point race along a coastal highway is going to require that runners leave early. In our case, Steve and I had to awaken at 3:30 in order to make our 4:15 pick-up. Within that window occurred one of the more surreal moments of the day, aka, the Starbucks Drive-Thru Conundrum.
The hotel where my friend Steve and I stayed was kitty-corner from a Starbucks. I'm not generally a national chain patronizing kind of guy, but I like Starbucks' coffee and I think they are less evil than many mega-corps. So, wondering how I might get my mandatory pre-race caffeine fix, I actually called the Starbucks on Saturday night to ask what time they would open on Sunday. Lo and behold, the assistant manager tells me that they'll be open at 4am because of the marathon. Yippee!! We're all set. So, with a 4:30 bus departure in mind, Steve and I walked over to Starbucks a minute after 4:00. The doors were locked, but there were baristas inside.
A guy leaning against a car in the parking lot yelled to us that the Drive-Thru window was open.  So, we walk over to the Drive-Thru, looking like escaped mental patients who might be hallucinating a car, only to be resoundingly rebuffed by the German-accented Starbucks employee.  She shut us down completely, until our friend with the car, Orlando, drove around and ordered our coffees.  More runners had arrived by this point, and we would pass Orlando money from the passenger's side window, which he'd give to the coffee Nazi inside.  She would hand him change and the drinks, which he'd pass back through to us.  A farcical exercise in hyper-technical, illogical corporate rules enforcement.  Might have made a tad more sense to unlock the doors!
SETTING/COURSE
Hands-down the most beautiful road marathon course one could imagine. Every bend in the road yields another glorious panorama, on a route marked by the ocean, mountains, rocky cliffs, lush green fields . . . all served up on a perfectly clear and relatively calm day (there was very little wind). Add in the goofy mile markers, with silly images and funny inspirational messages, and you get a fantastic course. The course beauty is a good thing, given that there is very little crowd support; still, the volunteers were excellent and the aid stations well-run and plentifully-stocked . 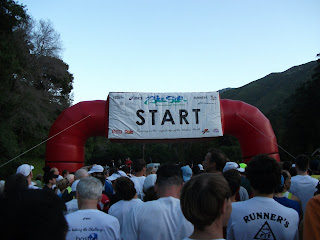 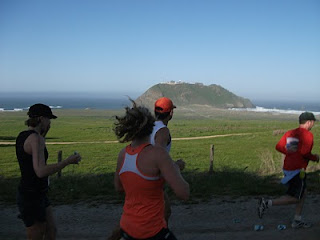 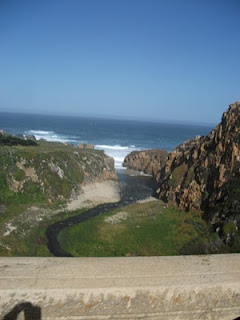 RUNNING COMPANY
I could not have asked for a more fun, positive, quick-witted group of running companions. Steve, Amy and James made it a joy to be pounding my still-tender body for a second 26.2 miles in less than a week. It was also fun to be running “easy”, such that chatting up complete strangers was very manageable, and rewarding. We talked to the drunk guys; a guy with a bizarre Mohawk; old guys; young women; brightly dressed runners; some who were loving life; some who were hurting. A pleasantly different take on the customary race experience. 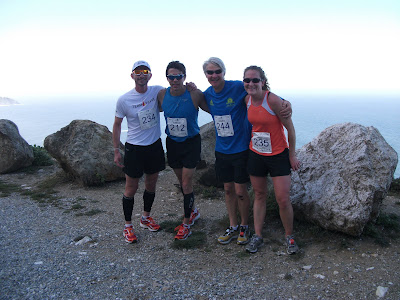 HOSPITALITY OF LOCAL HOST
The only thing more impressive than the location/design/décor of our host James’ awesome Pebble Beach home was the warm welcome extended by all four members of his family, plus the two loving (albeit incurably crotch-sniffing) dogs.
The pre-race group run – a painful 4 miles – was a nice introduction to the scene, but the main event at Casa James was the pizza and beer fest after the marathon. We were treated to the freshest, best tasting pizza napolitana I’d ever sampled, expertly made in his authentic outdoor brick oven (made and designed by his own company). 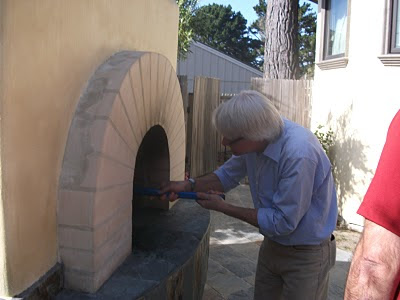 Add an enormous Reeses’ Peanut Butter Cup cake to the mix, and we had all the makings of a splendiferous post-race celebration. 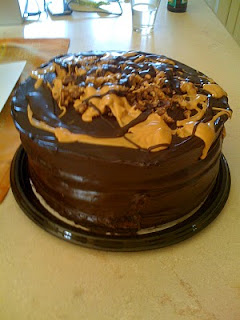 HOSPITALITY OF PRESUMED CELEBRITY RUNNER HOST
A certain uber-running author/celebrity was the nominal host of the Boston 2 Big Sur Challenge. Apparently, however, when one reaches a certain level of renown, one loses the ability to have an authentic human interaction, instead relying on a few phrases to be employed whether context allows for them or not. To be clear, I found “Ultramarathon Man” to be a good read, inspiring and motivational for a budding distance runner. However, the “50/50/50” follow-up, turning what should have been an amazing adventure into a media circus and supposed training manual, was – in a word – lame.
RACE-RELATED SCHWAG
The Boston 2 Big Sur Challenge resulted in a couple of extra pieces of race-related schwag, including an extra clay/ceramic medal and a custom Asics fleece jacket commemorating the experience. Love the medals; like the jacket. 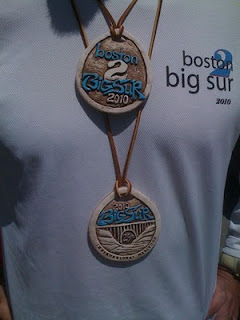 CONCLUSION
When asked about this latest running silliness, I've replied simply, "I'm glad I did it and I'm glad it's done."  Of the 497 months which I've lived on this Earth, April was probably the most physically and emotionally draining of them all.

I think that next year's fundraising endurance stunt will need to involve a single ultra-distance.  I'm thinking (just thinking) about entering a 100K ultra, and adding 8 miles before the start in order to get to 70 miles, since my father would have been 70 in April 2011.  Maybe the American Lung Association will benefit from the effort.  At this point, though, honestly, I just don't know.
Posted by Ron Abramson at 2:05 PM 3 comments: Links to this post