From Clarity, Commitment - Going Long in 2014

As this part of the world endures an especially long and unforgiving deep freeze, 2014 is nearly 1/12 over.  Hopefully, this dreadfully cold winter is making its last great stand, before yielding to more historically seasonable temperatures and a blessedly early thaw.

The last post about diet hinted that big things were coming for me in 2014.  Momentous things.  Things requiring preparation, dedication, and focus.  Things that took a lot of thought to decide to undertake.  Things that will likely change me forever.  The decision to pursue these things came from cutting through much of the emotional, physical, spiritual and other fog in my life and finding a clarity of vision which let me see clearly not only my goals, but also - more importantly - how to achieve them.  Notably, each of these what-I-deem-noble pursuits had to start with a full-blown commitment, and each will demand the full force of that commitment throughout its duration.

One of those things involves running, and it should take about a full day.  The other involves the most important of life's decisions, and should - with a lot of luck - take decidedly longer.

Last September, after finishing the 200+-mile Reach the Beach Relay (where we first met 3 years earlier), I asked Meredith to marry me. 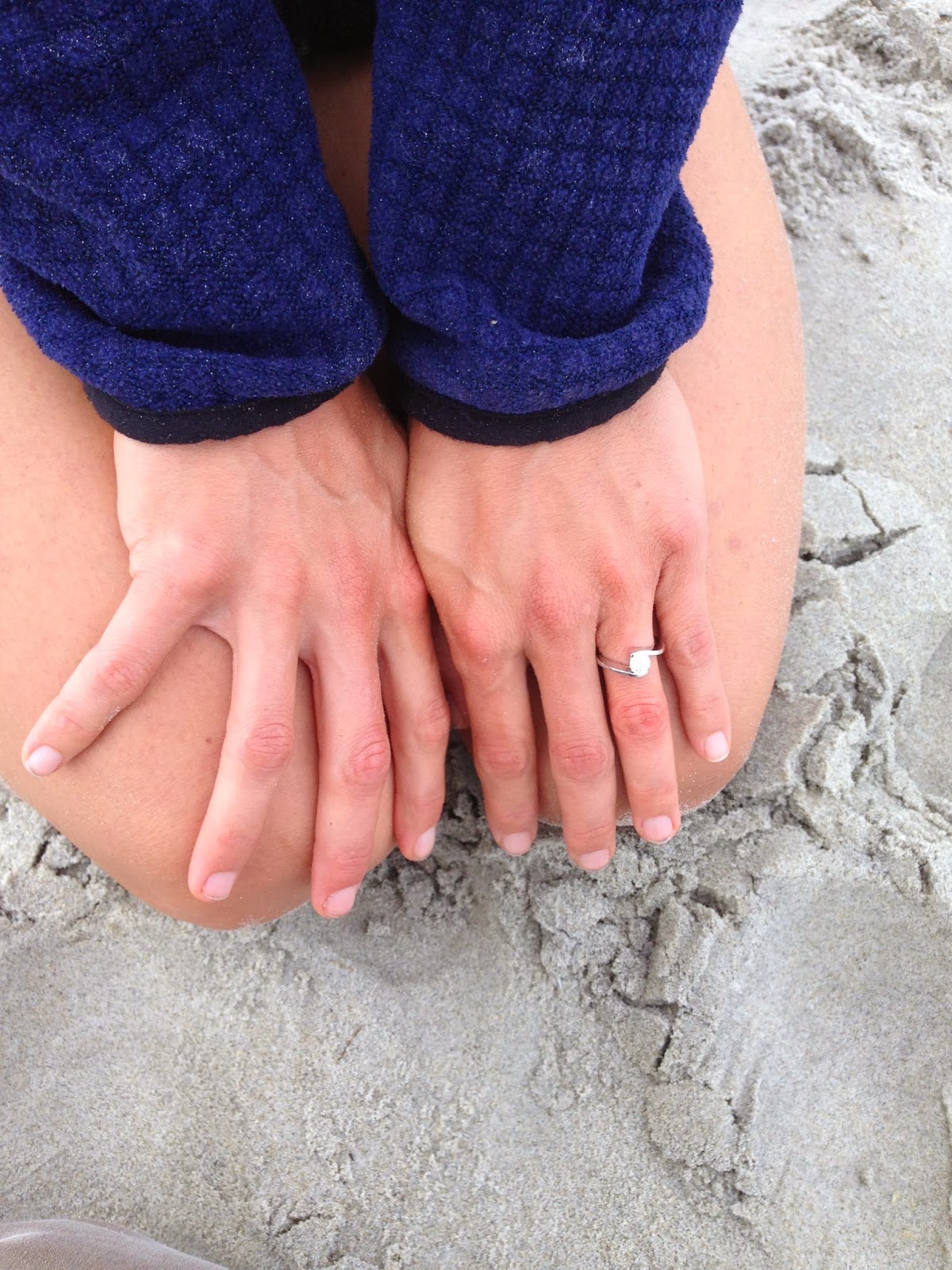 The standard responses to that question include two short options: a three-letter word (highly preferable), or a two-letter word (completely devastating).  The desired three-letter Y-E-S eventually came out, but it took a lot of reflection, emotion and patience . . . on both of our parts.  Now, we're planning a June wedding just outside our beloved Richmond, Virginia, the primary locale of our courtship.  And, while marrying my great true love is itself most appealing, realizing that we will all again someday soon be able to ride inner tubes down the James River helps get one through this winter's deep, dark doldrums.

The other major endeavor of 2014 will happen about 6 weeks later.  In what my friend Barb and others have termed BHAG (Big-Hairy-Audacious-Goal), I have registered for the Vermont 100 Mile Endurance Run. 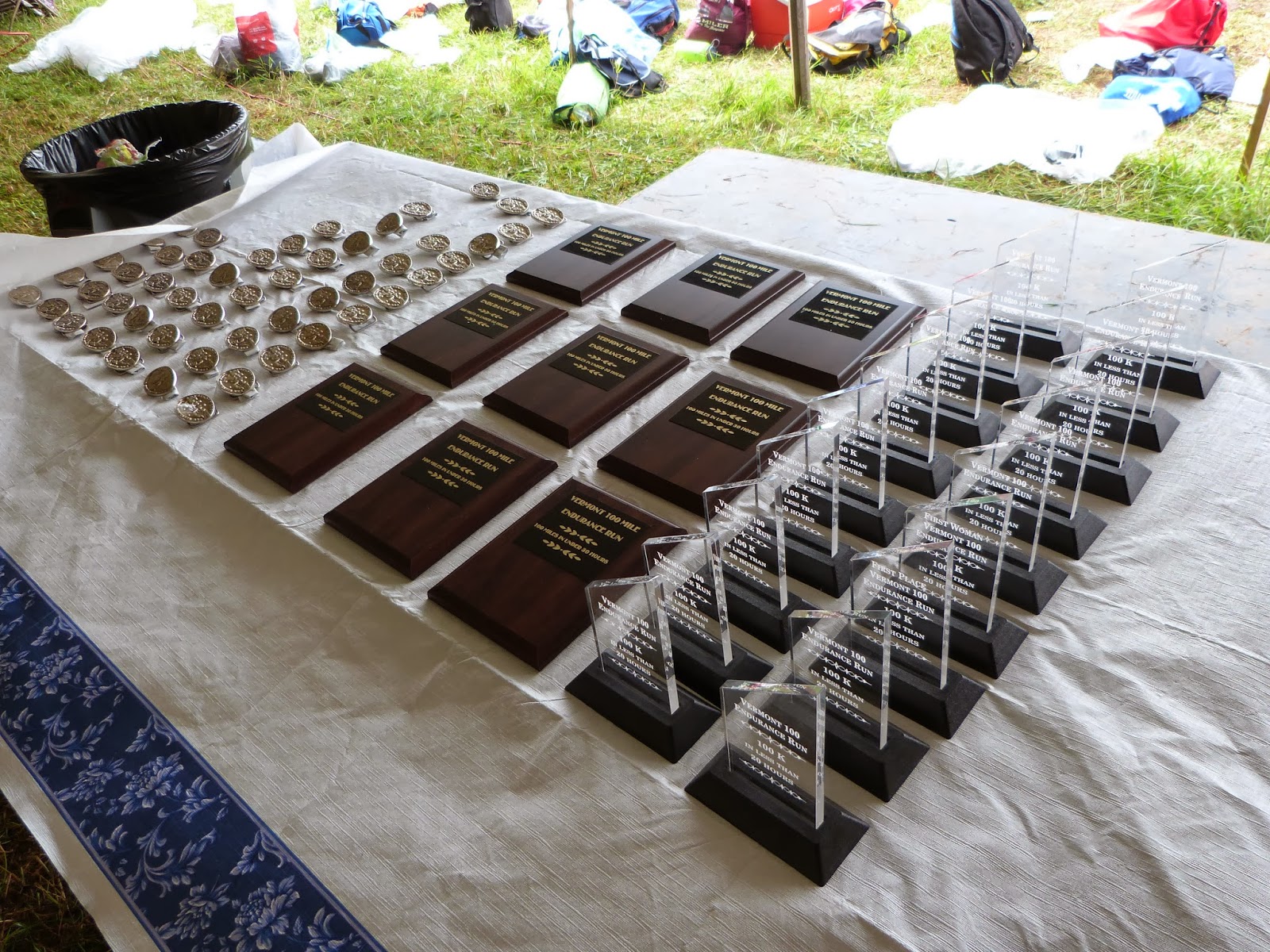 Yes, this guy.  The guy who's struggled to run 35 miles-per-week for the past couple of years.  The guy who's never run more than 90 miles in a WEEK.  The guy who DROPPED OUT of his first attempt to run 50 miles.  That same guy is going to train himself - physically and mentally - to become an uncompromising plodding machine, never going fast, but perpetually beholden to the ultrarunner's mantra of Relentless Forward Progress.  And, you know what?  I'm completely "terricited" about it, equal parts scared and excited.  Actually, that's not true . . . I'm far more excited than scared.

It is a great comfort to be back to having a clear purpose above beyond attending to the prosaic details of everyday living.  And, while some aspects of planning are expectedly less enjoyable than others, figuring out a wedding, a honeymoon, and how to get through a 100-mile footrace, all in the company of my favorite adult person, makes virtually every moment of every day wonderfully purposeful.

There's so much to figure out.  So many options to weigh.  So many attendant sacrifices to make.  But, sacrifice need not equate to burden when it's for reasons which mean so much to the sacrificer.

And, um, soooooo ... about that . . . it's been a while since I channeled the selfishness inherent in pursuing a running BHAG into benefiting a good cause.  That said, though, I'm not going to run for a cause this year, either.  I am going to run for FOUR CAUSES.  On Friday, July 18, 2014, I will run 4.8 miles.  Added to the 100 miles I'll run starting at 4:00 am on Saturday, July 19th, I will have run the equivalent of four full marathons.  And, so, I have chosen four causes which mean a great deal to me personally, and I will ask any like-minded folks to support them.

Since I'm setting up fundraising sites and finalizing other logistical details, I'll share the details soon.  Save your charity money just a little longer, then, won't you? ;-)

And, finally, partly for old-times' sake, and partly because it will keep me accountable, here is my training from the past two weeks.  I may or may not keep posting training recaps regularly in the months ahead, but I welcome thoughts, opinions, and insights, especially from the knowledgeable ultrastuds and studettes out in the Interwebz.

January 2014 is shaping up to be my best month of running/training since March 2011.  In terms of the overall training arc I've begun to map out for myself, I'm right where I want to be mileage-wise.  My legs and hips are certainly fatigued, but my energy is good (high-fat/low-carb/ketosis!), and I seem to be managing the higher volume well.  Of course, other than a few pickups on the treadmill and the short bursts which inevitably happen in soccer, all of these miles are quite slow.  As I realized during my most recent 20+-miler, where I was dragging and at times even walking up steep hills: When training for a 100-miler, running slow and walking *IS* race pace.

As I settle into this most excellent journey towards adventures and rewards both known and unknown, I'm glad that YOU (yes, you, reading this), are choosing to come along.

Thanks for reading. -Ron

Posted by Ron Abramson at 4:06 PM No comments: Links to this post

This post - or at least the underlying impetus for it - has been a long time coming.

Since I my late-teens, I've had chronic stomach issues.  Attributed to heredity (my mother has a "nervous stomach"), I'd come to accept it as a permanent burden.  Granted, it's been a longtime nuisance, but never been quite bad enough to derail me from doing what I've wanted to do.  In more recent years, though, let's just say that it became severe enough that I knew the precise location of every port-a-pottie and shielded patch of roadside woods within a 10+-mile radius of my house.

Among the suspected culprits of my gastrointestinal woes have been Celiac disease, Irritable Bowel Syndrome, lactose intolerance, and food allergies.  As a beer-loving aficionado of the carbohydrate-driven lifestyle, though, I embraced the traditional United States' government food pyramid (below) like a gospel.

But, despite my ostensibly "healthy" low-fat diet, I never felt quite right.  There's the obvious GI distress in the form of stomach aches and extended post-meal bathroom sessions (no one wants their kids to say "See you in two hours, Dad . . .").  My sleep patterns have been a mess since adolescence.  I have experienced daily energy spikes and crashes.  I needed to end every meal with a sweet dessert.  I couldn't sit in a movie theater without a box of Milk Duds or Twizzlers.  Oh, and there's was my much-beloved IPA life stage.  But, all along, I was at war with myself.  And, after years of constant training, racing, experimenting, it only seemed to get worse.  To this day, I think often about my fueling travails at the 2011 Boston Marathon, where I ran my PR of 3:08+ despite being unable to take any fuel after about Mile 14.  I know I was in shape to run faster.  But I didn't, so the marathoner I thought I'd become was tempered by the actual marathon I ran that day.  And, frankly, I haven't even been as good a runner, on any level, since.

So, I did what skeptics do.  I questioned myself, my beliefs, my behavior.  I consulted learned sources who have found a different way.  I shed that unquestioned orthodoxy and kept an open mind.

And, I'm rather glad that I did.

My first attempted foray into a full-scale diet modification came in the Fall of 2012, when I paid for a "Metabolic Typing" assessment.  The 25+-page report and analysis was enlightening, but the proscription for how to combine foods soon became unworkable for me.  The two main positive changes for me at that time were that I gave up soy and soda completely.  But, after feeling notably better for a few weeks, I went back to my old ways, where grains and sugars made up most of my daily caloric intake.

After another year of sub-par training, medication-assisted sleeping, and continued facially-okay-but-actually-fundamentally-poor nutrition, I decided to try something radically different.  Thanks to information received from accomplished runner/athlete friends (Abby, Tamy, Wes, Tim, Ernesto), as well as from experts such as Drs. Jeff S. Volek & Stephen D. Phinney, Dr. Tim Noakes, and the knowledgeable-but-occasionally-bloviating Vinnie Tortorich, I adopted a different dietary approach just before Halloween 2013.

The key resources for me have been Drs. Volek & Phinney's book, "The Art and Science of Low Carbohydrate Living"; a few select episodes of Vinnie Tortorich's "Angriest Trainer" podcast, and a cornucopia of excellent Paleo recipe sites, including PaleOMG, NomNomPaleo, and and the useful recipe compilation site Paleo Grubs.  Another unexpected benefit has been that I've discovered that I actually enjoy cooking and baking, and appreciate the challenge of preparing delicious dishes and treats within my newly discovered dietary parameters.


Since I despise labels, I call this new way of eating a low-carb/Paleo/NSNG (no-sugar-no-grain) approach.  It's not any one of those things exclusively.  I do consume some carbs, notably sweet potatoes and some honey/maple syrup.  I do consume dairy, but only whole-milk/full-fat.  I do eat peanuts, beans and some other legumes.  So none of the strictest labels fits me, and I'd have it no other way.  And, because a lot of folks ask, I most certainly DO NOT CALL IT A DIET.

The results since I started doing this have been - for me - nothing short of remarkable. I have managed to increase my running mileage from 25-30 miles per week to over 60, and have been playing soccer once a week, to boot.  I've run back-to-back long runs of 15 and 20 miles, with one small chia bar or a single nut butter packet to fuel me.  I am less sore after running longer than I could have imagined.


But, more importantly, my mental focus and acuity have improved to the point that I don't know how I was getting by before.  My friend Ernesto addressed this quite well in his own recent blog post: http://www.ernestoburden.com/2013/12/low-carb-iq-boost-ketosis-and-cognitive-function/.

Also, despite because of consuming SO MUCH FAT, moderate protein and so little sugar/carbs, my weight and body composition seem to have found their own equilibrium.  Here's a self-consciously taken selfie from about three weeks into the new way of eating: 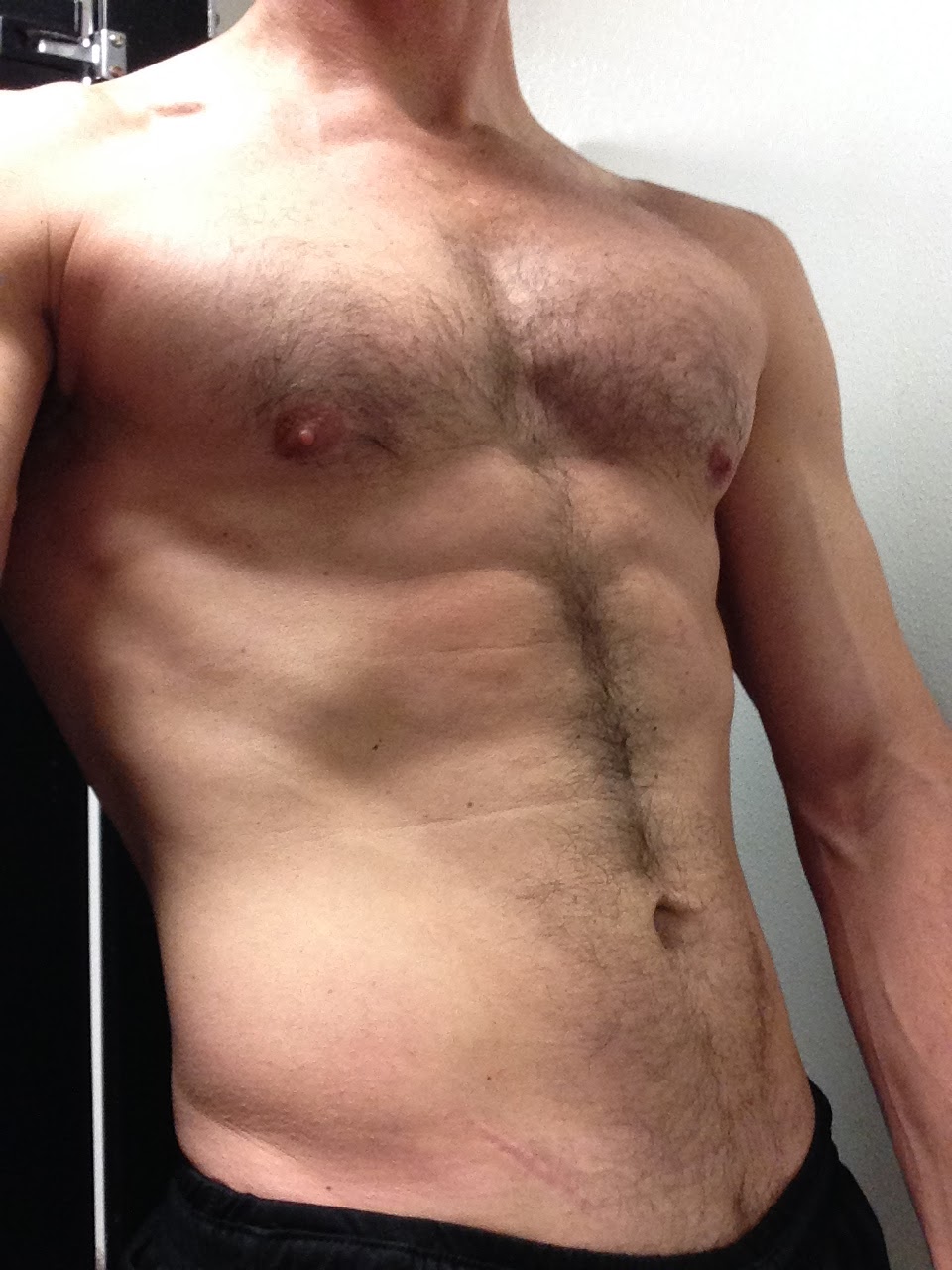 And here's the most recent, taken a couple of days ago (about 10 weeks in): 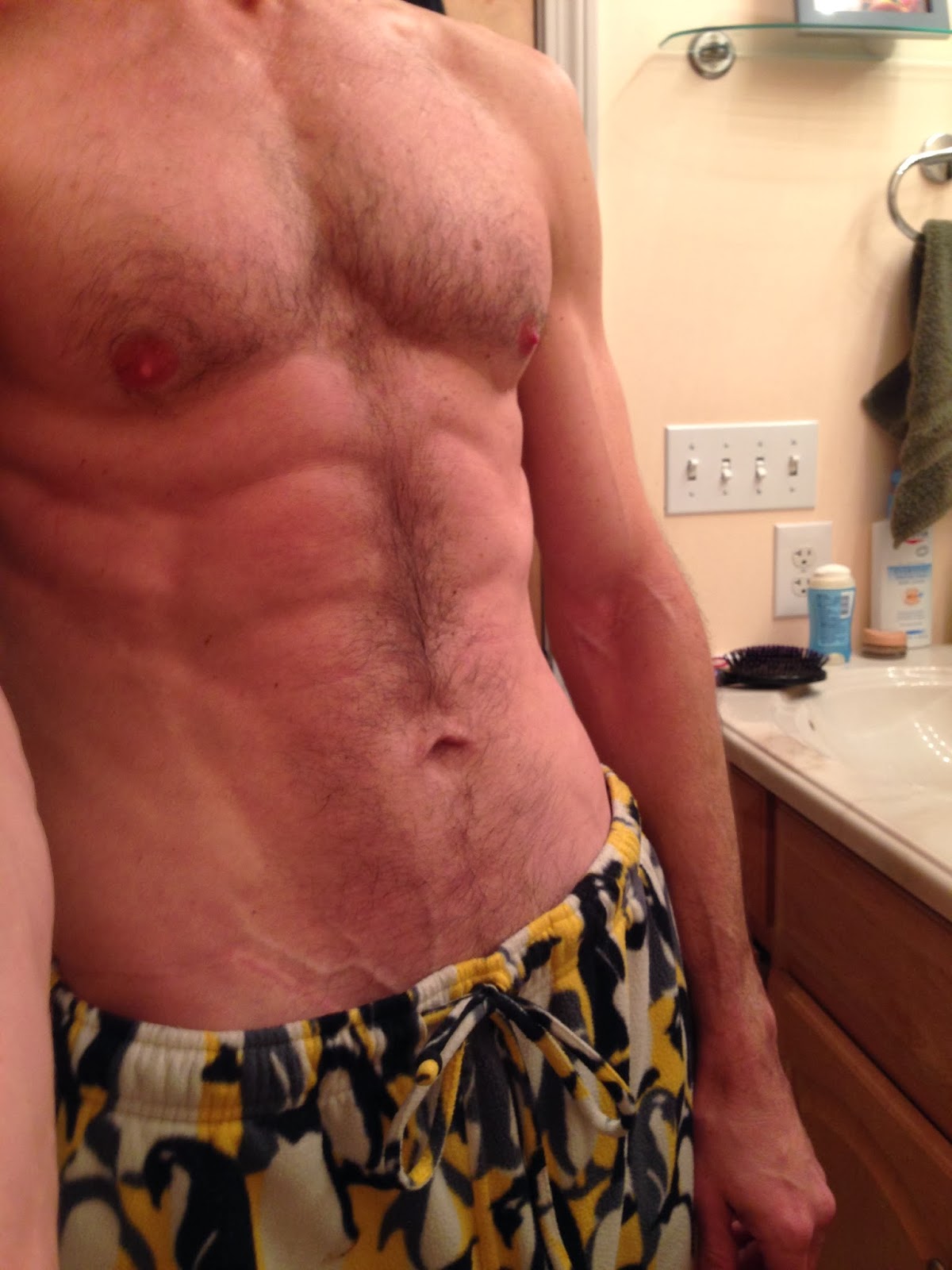 Of course, this remains an experiment, but the initial results and transformative feeling are so overpowering that I cannot imagine going back.  Have I cheated?  Of course.  In New York City.  In Italy.  During the holidays.  But every lapse reminds me in stark physiological terms just how much better suited I am to this new approach to eating.

Thanks for reading. -Ron
Posted by Ron Abramson at 5:26 PM 5 comments: Links to this post