On Saturday, May 7th, I had a new racing experience. As I should know by now, signing up for events months and months in advance can make such events seem like abstractions, like intriguing ideas that will never ripen into actual physical activities of the most challenging and uncomfortable order. Tough Mudder falls squarely into the "it-seemed-like-a-good-idea-at-the-time" category.

For the uninitiated, Tough Mudder grew out of a Harvard Business school class project, which the professor found interesting, but critiqued the fact that the organizers would likely never be able to attract enough participants (about 500) to break even, much less turn a profit. Tough Mudder events now exist all over the country, and sell out regularly, with well over 10,000 people doing events on any given weekend. The idea behind Tough Mudder is to create a ridiculously challenging, but nonetheless surmountable, course, ostensibly under the auspices of "former British Special Forces". The races involve - of course - mud, along with challenging terrain, icy water hazards, and all manner of obstacles requiring one to go up, over, through or around, with a lot of effort.

For my part, bounding up and down a mud- and snow-covered mountain did not intimidate me. Climbing, balancing, jumping . . . no problem. Electrical shock?  Bring it.  But being immersed in near-freezing muddy water time and again required me to confront one of my own demons. Ever since my body started to adapt to high running mileage by getting leaner, I've had almost zero tolerance for cold water.  Turns out, that's a significant part of the Tough Mudder experience, especially in Vermont in early May.  So, while my relationship to cold water might not be a phobia, per se, it definitely qualifies as a strong aversion, and thus became the "thing" upon which I fixated as the Tough Mudder start approached.

I got up early and made the longer-than-expected drive to Mount Snow.  It was a mostly gray, cool morning, with the car thermometer reading between 38 and 46 degrees.  It was blustery, but didn't look like it would rain.  As one friend put it, one good thing about Tough Mudder is that the weather is basically irrelevant.   True enough.

I arrived early enough to park, take a few pictures and get into the "zone".  I strolled around, appreciating the clever-but-contrived signage.  I got my face and arm "marked" with my race number.  I saw all sorts of folks: military-types, runners, triathletes, costumed wing nuts, tall, short, fit-looking, not-so-fit-looking, well-geared, and minimally-dressed.  Hairstyles were colorful and interesting, with the dyed Mohawk perhaps the most favored look.  Many teams had matching uniforms, some more fanciful than others. 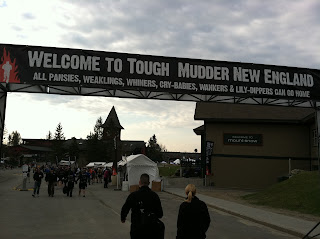 Seeking to stay warm, I lingered inside, then got into my racing clothes before checking my bag and making the 1/3-mile hike up to the starting area.  I was one of the first participants to line up, and we were the day's first wave of "Mudders".  I chatted with a few folks at the start, including a young Army guy who'd just run a 1:18 half-marathon off minimal training (hate him!) and a guy who operates an adventure race blog featuring Tough Mudder reviews.  I talked to two guys who are striving to do ALL Tough Mudder races around the country, including twice in one weekend sometimes.

The pre-race speech was a tad too canned for my taste.  The announcer read a prepared script, whipping us into a frenzy, and fomenting an atmosphere of this event being an expression of rogue courage which would somehow elevate us to a higher state of being.  He brandished a large poster of Osama Bin Laden, with a large red "X" through the photo, and some of the crowd started yelling, "USA, USA, USA!!!"  I found the demonstration somewhat distasteful, and while I appreciate that Tough Mudder raises money for the Wounded Warrior Project, the Bin Laden gesture seemed cheap, disrespectful and completely contrived.  We were there for our own sakes, to play in man-made obstacles with only minimal danger to ourselves.  This was semi-extreme recreation, not the sort of goal-based sacrifice that would make the world a better place (and analogizing that premise to our current international conflicts is a loaded exercises in itself).

And, so, after months of anticipation, the gun sounded and the masses dashed down the steep base of Mount Snow, some yelling like medieval warriors, before turning left and heading STRAIGHT UP the steep ski slopes for a mile and a half.

I was trying to find a rhythm, and it soon became clear to me that trying to run up a 30+% grade with alternating surfaces of slippery mud, grass, wet rock, snow and ice was to embark on a fool's errand.  Add to that the charming touch of being sprayed with snowmaking machines (meaning, thick mists of cold water), and I changed my slogging jogging gait to a power hike, letting a number of fellow Mudders go ahead of me.

After what seemed like an eternity, we finally stopped climbing and started to confront the obstacles which supposedly set Tough Mudder apart from other endurance events and adventure races.

In all honesty, I cannot remember the particular order of the challenges/obstacles, but I certainly remember many of them, particularly those involving exposure to frigid water.  Here are some highlights: 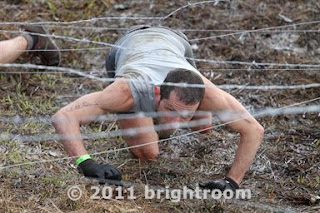 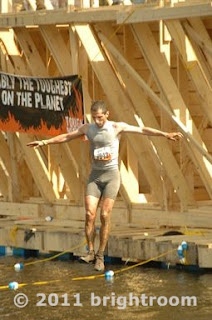 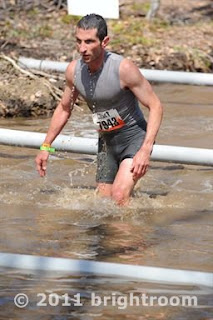 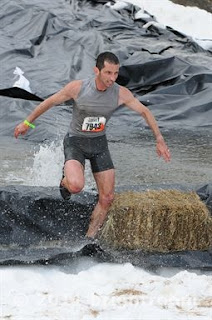 I was passing plenty of others in the final stages, and ended up in a sort of "head-to-head" battle with a guy I'd seen since the beginning.  On the poetically-named "Turd's Nest", I passed him and did not see him again until after the finish.

The final few obstacles involved trudging through iced red water in the "Blood Bath", sliding down the mountain on wet plastic, hurdling some uncomfortably handled metal pipes, and then the two Tough Mudder signature finishing obstacles: "Fire Walker" and "Electroshock Therapy".  The fire segment was mostly a noxious stretch of blinding smoke.  The much-ballyhooed electric shock was little more than the sort of ticklish pinprick one would get from a novelty hand buzzer. 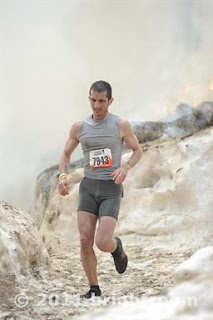 I charged through finishing chute alone, arms pumping while a few people cheered, with the clock reading 11:19:xx am, meaning I'd just taken nearly 2 hours and 20 minutes to go 10 measly miles.  I also heard - informally - that I was 10th overall in the heat, which I guess was a good thing.

I got my finisher's headband and race t-shirt, some food, a space blanket and lingered around waiting for others to finish.  I grabbed a Dos Equis, drank about two sips and tossed the rest.  I watched as people threw kegs at cardboard cutouts of celebrities.  And then I de-briefed briefly with a couple of other finishers before heading towards the gear check in an effort to get dry and warm.  The line was very long, as the later starters were checking in, and only a couple of us were seeking to get bags we'd checked earlier.  There was some confusion, and I just stood there, shivering, while the volunteers looked for my belongings.  Several aspiring participants started asking me questions, commenting on my bloody legs, seeking reassurance that it wasn't "so bad".  One young woman asked, "How do you feel?" A: "Tired." Q: "But happy, and glad you did it, right?" A: [after long pause] "I'm tired."  She seemed deflated. 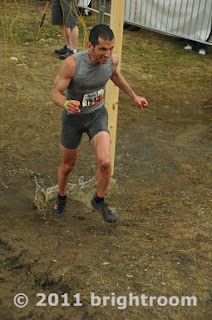 Looking back on Tough Mudder, the life-timing of this event was apropos as it turned out, given that it fell  at the end of a very intense and difficult couple of weeks.  I'd been in a bit of a post-Boston funk, running less than I have in years.  I've been tired, somewhat listless, and quite preoccupied with the transition I'm making from married father of three to separated part-time "single" dad.  Other personal confusion and challenges have also abounded.  But Tough Mudder was a great opportunity to do something "different", something outside my athletic comfort zone, and to do be pleasantly surprised by doing it pretty well.  As usual, the life lessons and parallels are there for the taking.

One common question since May 7th has been, "Would you do it again?"  The answer for me is that I'd consider doing it in a warmer place and perhaps with a team of similarly-conditioned folks, since the camaraderie of the experience is one of the things which sets Tough Mudder apart from the typical running race experience.

Thanks for reading. - ESG
Posted by Ron Abramson at 10:24 AM

AKA Darkwave, AKA Anarcha, AKA Cris. said...

Wow. I had no idea of the background behind the tough mudders (HBS and all). Very interesting.

Had no idea that the race concept originated in a business school class. Clearly, the idea has taken off. Glad this was a great diversion and physical release for you at this juncture-sometimes doing something completely different with running and training is a good way to break out of a temporary rut.

Huh. I'm so glad you gave this detailed RR. I've been toying with doing one of these and I just made my mind up to cross it off my list. Eeek! That cold water would be enough for me to call it a day. Hope you find your running mojo soon. While you wait, it's okay relax a little.