I Came, I Saw, I Conked Out - Mt. Washington Road Race Report

The Mount Washington Road Race has achieved cult-driven, quasi-mythic status among a select group of masochistic runners who wish to exert their will over the Northeast's highest peak.  At 6,288 feet, the summit of Mount Washington's primary claim to fame has been as home of the world's worst - or at least most unpredictable - weather.  The foot race traces the auto road for 7.6 miles, and, according to the official course description, "has an average grade of 11.5% with extended sections of 18%, and the last 50 yards is a 22%'wall'".  The race begins, though, with a 300-meter downhill, just to make things appropriately perverse.  It's such a popular undertaking, that thousands of people get shut out every year, thanks a lottery system which selects the 1000 lucky (?!) winners who get to slog their way up a course that slows the average entrant's running pace by 60%.  I put off entering this race, in light of the comment I heard from a past participant, who told me long before I became a runner, "The first mile was the hardest thing I ever did.  Then it just got worse."  That description echoed in my mind for years before I took the chance and entered the race.

So, in 2010, I was one of those 1000 entrants, getting the opportunity to take part in the 50th running of the race.  I had hoped to make my ascent within some semblance of respectability, perhaps in the low to mid-1:30's.  I'd have been satisfied with anything under a 1:45.  As with any and every race, I never considered that I might not make it to the top.

I had been feeling a certain sense of antipathy towards MTW.  I did not alter training, my training, save for a single mountain run one week out.  I climbed about 1500 feet in 3.5 miles and felt surprisingly comfortable doing so.  I figured that while I had no reason to expect great things from myself, I would at least be able to sustain a half-marathon-type effort as I inched my way up the auto road.

It bears mention here that I've been feeling sort of "flat" since after Boston, and that I've endured a pervasive sense of hip tightness during attempts at fast running.  This tightness coincides with recent efforts to shed the prescription orthotics which I've been wearing consistently since 2008.  It's been frustrating to feel like I'm hindered by nothing more than a "range of motion" issue, rather than by running fitness, per se.  More on that shortly.

The weekend started with a nice drive up to Jackson, NH with my friend Dan, a veteran of MTW and a great guy with whom to chat about running and life.  We arrived at the epicenter of race weekend, the Eagle Mountain House, where we got our packets, shirts, etc. and mingled with some of the country's top mountain runners.  We also watched the first set of inductees into the MTW Road Race Hall of Fame.

We got to my friends' Jim & Chris' wonderful mountainside home, and were treated to a delicious pasta dinner, good company and lots of positive pre-race talk.  As the sun set over the mountains, including Mount Washington itself, which was visible from the house, I laid out my gear and prepared for the next day.

Dan and I left the house to meet another Jim and his girlfriend Lindsay, with whom we had orchestrated the labor-intensive and logistically complex "ride-down" process.  We had breakfast, and then headed towards the base of the mountain.  Linsday left us driving my car, and she planned to meet us at the top to drive us all down.

Many folks were concerned and thus complaining about the weather, as it was a very warm day.  Even at 9:00 am, an hour before the start, it was above 80 degrees, though not particularly humid.  I lingered around, did an easy mile warm-up run on the trails and got into race mode.  I was more excited than nervous as we lined, and took my place about a quarter of the way into the assembled mass of humanity.  As the announcer warned us about the volume of the imminent starting blast, most of us covered our ears.  The boom came, and we were off. 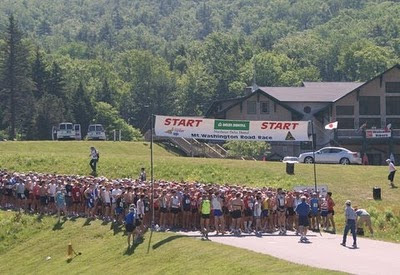 I started out at what I'd describe as "fast training" pace, knowing that I could not risk redlining early in this race.  I had decided not to look at pace, time or distance, setting my watch instead to the heart rate display screen, and seeking to keep my heart rate in the 170-172 bpm range (which corresponds approximately to my half-marathon heart rate).

The first mile went fine.  I stayed steady, watched my HR climb steadily and tried to get into a steady rhythm, a common piece of advice from mountain veterans.  I thought I was accomplishing that, but somewhere in the middle of the second mile, I felt that all-too-familiar hip "lock-down" sensation.  It's tough to put into words, but it's like the ligaments and tendons connecting my thighs to my hips have rusted, so that they move slowly.  It doesn't cause pain exactly, just an unshakable sense of tightness that makes it nearly impossible to keep up my leg turnover.  I've experience in road races before, but when it happens on a relatively flat surface I can slow down and usually work through it.

As I approached the end of the second mile, I broke my "don't-walk-'til-tree-line" vow.  As I walked in an effort to collect myself, I realized that the tightness was only worsening.  I tried running again.  No dice.

I ran and walked until about the 2.5 mile mark, and then realized that the steep pitch was too unforgiving, and that the best I could hope for was a seemingly interminable 5+-mile shuffle to the summit.  Deciding that wasn't what I'd registered for, I did something extremely tough for me: I stopped and dropped out.

I ripped my singlet off in disgust and started the walk of shame down the mountain, while the bulk of the field still worked its way up the mountain.  I happened to see Dan, and then Jim so they'd know not to wait for me at the top.  As Dan went by, I actually had a momentary change of heart, and decided to chase after him, to see if he could somehow pull me to the top.  He never heard me, and I didn't catch him.  As it turned out, though, he was hurting himself, and pretty much shut it down shortly after I saw him and walked to the summit.

When I reached the bottom, I wallowed for a bit before going for an easy run on the trails.  Even slight uphills were bothersome, so I finally just packed it in for the day, disappointed with myself.

I sat under the big tent, out of the scorching sun, talking to a couple of other wounded warriors.  Lots of people succumbed to the heat.  I couldn't help but feel like I fell prey to a lack of internal fortitude.

It was particularly frustrating to have this attempted conquest linger as unfinished, since I'd planned to run it once, wear the shirt as a badge of honor and simply check this ridiculous pursuit off "the list".  Now, of course, I have to head back next year, though my friend Jim, who's run the race about 17 times (and who ran quite well last Saturday), is plotting an unofficial run later this summer.  If I can get to the top on my own two feet, I'll likely consider that "close enough" and move on to other, less harshly vertical, challenges.

As a postscript to the disappointment of MTW, I have sought the help of a new chiropractor, one certified in Active Release Techniques, aka, ART.  Many runner friends swear by the painful sessions, and - after two such torture treatments to date - they've not exaggerated the pain part of the process.  I'm waiting on the gain.

In other brief running news, I have formally hired a coach to get me to Chicago, and have volunteered to be a pacer at the Vermont-100.  More on those two topics later.

Thanks for reading. -ESG
Posted by Ron Abramson at 8:03 PM

That sucks! When we know we can do better, but everything just falls apart!

Sorry to hear your hip problem prevented you from making it to the summit. I've had pretty good results with ART. Hang in there. You will get better.

Tough day up the mountain, that's for sure. I know it's hard accepting defeat, but when your hip limits your ability to fight, there's nothing you can do about it. No doubt in my mind you'd happily make it to the top if you can get the rest of your body to cooperate.

Ugh, I feel for you. Must have been incredibly hard on the heart to shut it down, but you obviously did the right thing. Hope you get up it unofficially so you don't have to wait another year. My those ART sessions get that hip ready for the next challenge, asap.